All Around Costa Rica - the Brauns 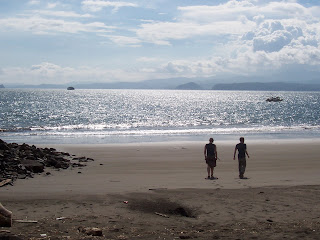 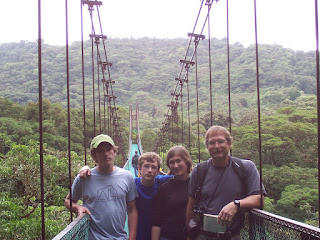 Our time in Costa Rica is already coming to a close, alas. We have had a wonderful time learning about Costa Rica as it is today and seeing a few old friends. One of these was Adrian, who worked with us 15 years ago as Save the Children’s Program Manager on the Pacific Coast. We were surprised to find him no longer in the social services sector, but running a small store called Mundo Electrónico. We walked in unannounced and all he could say at first was what a gift it was to see us. Jens and I were also thrilled to find him and enjoyed a visit with him, though it was too short because Adrian couldn’t leave the store and business was brisk with Christmas shoppers.

Thanks to sleuthing on the Internet, we were able to find in the San José area our friends Javier, an architect, and Maria Luisa, an environmental biologist. They welcomed us in their home for lunch on Wednesday, greeting us with joy and showing the photo album in which you see very cute 4-year-old Natalie and 1-year-old Lucas on either side of Maria Luisa. The photos were from when Javier and Maria Luisa joined us in 1994 on a canoe trip in the Boundary Waters of Minnesota. Certainly, it was a memorable trip for us, but especially for them.

In Monteverde we visited with Ricky, the brother of Jens’s good buddy Carlos, who grew up in that Quaker community and attended Earlham. Ricky is a tour guide (biologist) and has seen tourism explode from fewer than 10,000 visitors per year in their small cloud-forest community in 1985, to 30,000 in 1992 when we were last there, to 200,000 this year. Monteverde’s emphasis, you may already know, is ecotourism. We had a great time taking advantage of new tourism infrastructure: a walk on bridges that brought us up into the canopy of the cloud forest. Wow!

We also enjoyed a wonderful visit in Monteverde with a former Westtown teacher and his wife. They are now into their second year teaching at the Friends School there and are loving it. We brought dinner to their home and had great conversation for a couple of hours.

- The country is still absolutely beautiful, with volcanoes and other mountains, picturesque villages, gorgeous coastline on both the Pacific and Caribbean sides, rainbows after afternoon showers, lots of forest, and beautiful and plentiful birds. Over 40% of the country is preserved in national parks and other nature reserves. We’ve enjoyed seeing monkeys, iguanas, colorful fish, and other wildlife.

- Tourism now brings 2 million visitors each year. Imagine how that feels in a country the size of West Virginia with a population of just over 4 million people.

- When we lived here there were about 250,000 cars on the road. Now there are over a million plus all the tourists’ rental vehicles – and as far as we could tell, there are no additional roads or even lanes added to roads.

- Pineapple has become a big export crop, but does not yet surpass bananas as the #1 export. Pineapple plantations are as damaging to the environment as banana plantations can be: the pesticides and fungicides leave people sterile, pollute waterways and kill wildlife, etc. The fruit companies have done a lot to move toward being a green industry for bananas but not yet addressed pineapples.

- The only sign left of the major earthquake we experienced in 1991 (7.4 on the Richter scale) was the exposed coral reef right off the Caribbean beach (now dead). It was lifted out of the ocean when the land was heaved 3-4 feet upward by the earthquake.

- Costa Ricans, like Americans, are thinking about organic food, global warming, peak oil, and other global trends, and some are living differently because of their awareness in these areas.

Tomorrow we’re off to Ecuador, hoping all will go smoothly at the San José airport when we try to extract Lucas from his “home country.”