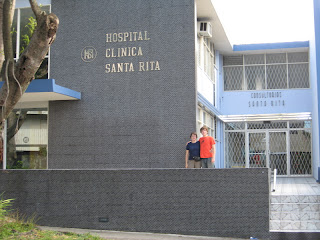 One day Lucas and I visited Clinica Santa Rita where he was born in 1990 (see photo). The guard at the front door was more than happy to admit us so that I could show Lucas more than just the outside of the building. The nurses made us feel most welcome and allowed us to tour the room where I was in labor, the registration area, and the baby nursery, but not the delivery room, because it's now the C-section room and off limits for other purposes. What fun!

Departing Costa Rica took an extra hour at the airport, where we presented the official copy of Lucas's birth certificate, photocopies of our passports, government stamps, and a completed permission form. Both Jens and I signed, as indicated, in front of the immigration official and she stamped Lucas's departure card, allowing us to then check in for our flight.

The trip to Ecuador was easy - a flight of less than 2 hours - and we were happily reunited with Helen, Gene, Eric, Ellen, Will, and Jesse. Now we're becoming reacquainted with Ecuador after a 3-year absence and looking forward to a few days at the beach on the Pacific Ocean. We're sorry you're getting hit by one snow storm after the next and will try to bring back warmth and sunshine to share with you all when we return.