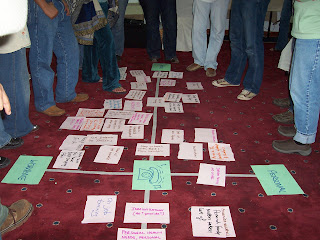 The workshop is over and the participants are scattering to the winds. I just ran into the Armenians and Azeris talking in the lobby. They said they are enjoying each other's company and finally having a moment to learn about one another’s countries. For decades, Armenia and Azerbaijan have been fighting off and on over a region called Nagorno-Karabakh, so it’s great to see these individuals building a bridge through their Save the Children work.

Day 4 was as intense as the first 3 days of the workshop. The focus was on carrying out a distribution of relief items in a community: planning, organization, security, set-up, and execution. The trainers supplemented by a few trainees were the beneficiaries, and we arrived at the distribution point with exaggerated stories of our plights and testing the security and logistical procedures. In the end, some "beneficiaries" left with just their share of blankets, food, and tents, while others snuck out with more than their allocation, and still others left with nothing because of bureaucratic red tape. It was a good learning exercise for the trainees - I'm sure they'll do better next time!

Every morning, first thing, I'd asked the participants if they were "REDI" (they are part of the team for the "Rapid Emergency Deployment Initiative"), and they would respond with more or less volume, "Yes!" The photo is from a session where they brainstormed about what they would need to have ready both personally and professionally before the call came to head out immediately to an emergency response and what they would need to do after the call came. Answers included having prior arrangements for childcare and long-distance bill paying, and having a current will and one's vaccines up to date.

During the closing session, we heard from participants how much they had learned and in what areas of humanitarian response they have gained confidence. We hope they can put their new learnings to good use - well, actually, we'd rather they didn't have to, because that would mean people are suffering from one disaster or another, but such is the world in which we live.

This evening I finally made it into the hot springs, where I tried not to relax too much, knowing that upon exiting, I'd have to climb the 100+ steps back up to the hotel. Still, it was wonderful.

Tomorrow I head to the airport and take the long flight to the U.S. I'm ready to be home.